The Human Element: A Time Capsule from the Anthropocene (Hardcover) 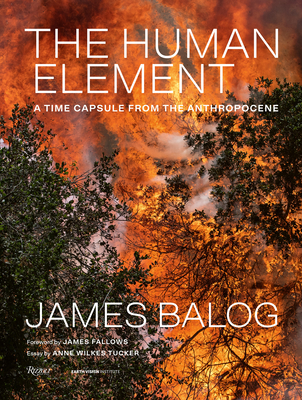 A magnum opus on the human impact on our planet—from the threat of animal extinction to catastrophic wildfires, global warming as visualized through glacier melt, and increased ferocity of historic floods and storms—James Balog presents four decades of his research and photography in this environmental call to arms.


For four decades, world-renowned environmental photographer James Balog has traveled well over a million miles from the Arctic to the Antarctic and the Alps, Andes, and Himalayas. With his images heightening awareness of climate change and endangered species, he is one of the most relevant photographers in the world today.

Balog’s photography of and essays on “human tectonics”—humanity’s reshaping of the natural environment—reveal the intersection of people and nature, and that when we sustain nature, we sustain ourselves. This monumental book is an unprecedented combination of art informed by scientific knowledge. Featuring Balog’s 350 most iconic photographs, The Human Element offers a truly unmatched view of the world—and a world we may never see again.

James Balog is an avid mountaineer and the author of eight books. His 2018 award-winning film The Human Element was screened worldwide. Balog’s Extreme Ice Survey (EIS) is the most extensive photographic study of glaciers ever conducted, and his documentary Chasing Ice won an Emmy and an Oscar nomination. His photographs are in dozens of public and private art collections and extensively published. Anne Wilkes Tucker is the curator emerita of the Museum of Fine Arts, Houston. James Fallows is a national correspondent for The Atlantic. His work has also appeared in Slate, The New York Times Magazine, The New Yorker, and The American Prospect.

"James Balog, a photographer best known for his remarkable time-lapse glacier photos, has been chasing the climate story for decades. A new book compiling his work, The Human Element, is due out later this year." —THE NEW YORKER

"James Balog's new book The Human Element is a magnum opus destined to be a photographic classic. It is a profound statement by a force of nature on the forces of nature.” —DENNIS DIMICK, FORMER EDITOR, NATIONAL GEOGRAPHIC

“A collection of visually arresting, powerful, historical-marker photos of ‘the Anthropocene’ by one of the celebrated naturalists and photographers of our time. Physically the book is large, very heavy, and beautifully produced. It is like a museum exhibition, captured between covers. Since people don’t need printed dictionaries any more, you’d want to put it on a dictionary stand—both so you don’t have to hold it, and so you can carefully leaf through its hundreds of arresting images. However you can see this photographic record of our time—in this book, in the gallery exhibits that should resume someday, or otherwise—you should make a point of doing so. This is a beautiful, and alarming, and motivating portrait of our era.” —JAMES FALLOWS

“An epic and triumphant achievement that reveals the decades-long arc of a career of a master photographer and concerned naturalist—as well as his deep commitment to chronicling the adverse and ever-accelerating impact of humanity’s toll on our precious planet.”  —DAVID FRIEND, VANITY FAIR

"Your magnum opus is clearly a landmark accomplishment, offering forceful reasoning for urgent action! ... You deserve endless credit from the rest of us hapless humans for devoting your life and your astounding talent to ringing the alarm bell with a sharp call to action.” —ELIZABETH BROUN, DIRECTOR EMERITA, SMITHSONIAN AMERICAN ART MUSEUM

"This is epic and so filled with wisdom and heart. I cannot believe that one human created all of this and also can't begin to imagine what it took to create  it. This is your life, and a profound statement about our world.” —AMI VITALE, NATIONAL GEOGRAPHIC PHOTOGRAPHER AND FILMMAKER

“The Year’s Best Photo Books. Whether it's power stations pumping out smoke or a blazing forest, the environmental photographer James Balog offers a harrowing look into the impact humans have on our planet.  With its hurricane-crumpled homes, tsunami-swallowed freighters and even playful doodles of tyre tracks on salt flats, this book can easily make a reader feel small. Yet it also inspires with its reverence and wonder, from the slow ache of ancient woodland and its gnarled sculptures, to the smoke-blackened faces of
firefights up close.” —THE TIMES (LONDON)

“Balog’s hefty new book, The Human Element, presents an anthology of his words and pictures from a lifetime of bearing witness to human impacts on the planet.” —INSIDE CLIMATE NEWS

"Best Illustrated Books of the Year. Hugely important, this book bemoans the effects of climate change on our shrinking natural habitats. Balog's photographs range from shots of flowing lava to power stations issuing vast plumes of smoke, from flooded streets to burning forests and some amazing endangered species. Who would have thought that such destruction could be made so beautiful?" –DAILY MAIL UK

“12 books on climate and the planet for the holidays. These books meet this fraught moment with confidence, vision, reflection, and imagination. Another COVID year behind. Another COVID winter ahead. A 26th global climate meeting just adjourned. In Washington, the more aggressive climate and social justice bill, ‘the budget reconciliation bill,’ still in the balance. And records, oh so many records, broken–for fire, for rain, and for temperatures. Are there books that can meet this moment? Books that can lift burdened spirits over the holidays? Yale Climate Connections has identified a dozen. [The Human Element] transforms anxiety into wonder and will, with compelling visualizations. Wrap one up for a relative or a friend. Or for yourself.” —YALE CLIMATE CONNECTIONS