Off Trail: Finding My Way Home in the Colorado Rockies (Paperback) 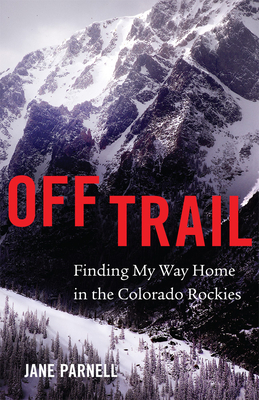 Only one person believed Jane Parnell when she reported being raped at twenty-one: the mountain man who first led her up one peak after another in the Colorado Rockies and who then became her husband. Parnell took to mountaineering in the Rocky Mountains as a means to overcome her family's history of mental illness and the trauma of the rape. By age thirty she became the first woman to climb the 100 highest peaks of the state. But regaining her footing could not save her by-now-failing marriage. Unprepared emotionally and financially for singlehood, she kept climbing--the 200 highest peaks, then nearly all of the 300 highest. The mountains were the one anchor in her life that held. Finding few contemporary role models to validate her ambition, Parnell looked to the past for inspiration--to English travel writer Isabella Bird, who also sought refuge and transformation in the Colorado Rockies, notably by climbing Longs Peak in 1873 with the notorious mountain man Rocky Mountain Jim. Reading Bird's now-classic A Lady's Life in the Rocky Mountains emboldened Parnell to keep moving forward. She was not alone in her drive for independence. Parnell's memoir spans half a century. Her personal journey dramatizes evolving gender roles from the 1950s to the present. As a child, she witnessed the first ascent of the Diamond on Longs Peak, the "Holy Grail" of alpine climbing in the Rockies. In 2002, she saw firsthand the catastrophic Colorado wildfires of climate change, and five years later, she nearly lost her leg in a climbing accident. In the tradition of Cheryl Strayed's Wild and Tracy Ross's The Source of All Things, Parnell's mountaineering memoir shows us how, by pushing ourselves to the limits of our physical endurance and by confronting our deepest fears, we can become whole again.